Can Snakes Get Under Doors Into Your House? 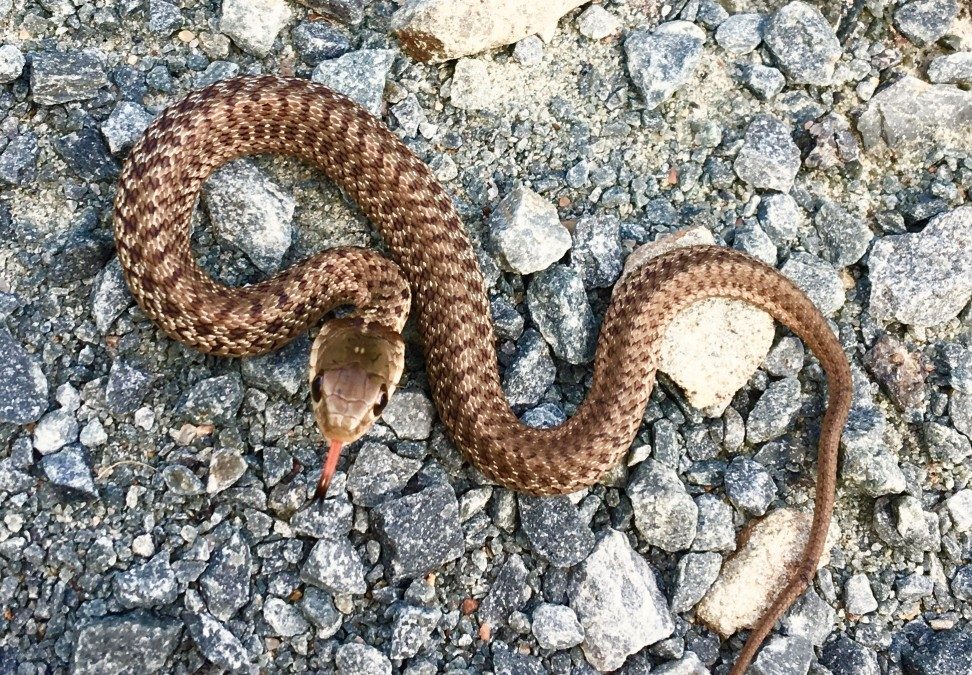 Have you ever wondered whether snakes can slither under doors to your home? Well, it is a possibility, but also unlikely. There are many other factors to consider before giving a blanket answer to this question.

Snakes are common guests in properties that are located in grassy areas or near a forest, park, or farm. Not all snakes are harmful though. Some just roam around looking for small rodents to eat, posing no harm to humans around the place. Regardless, many people find snakes terrifying and would rather not have them around and definitely, not in their homes.

Can Snakes Crawl Under Doors?

The space under doors in most conventional homes is too tiny for snakes to crawl under. However, any cracks or gaps on doors provide potential entry points for snakes as some of them are small in size and can slither through.

If your house is well maintained and all doors are in perfect condition, you need not worry about a snake getting into the house, at least not by sliding under your doors.

However, if you can see the daylight from underneath your door, it suggests that the weather stripping below is worn out, and you need to change or fix it. Depending on the wear and tear on it, it can be risky if it’s large enough for a snake to enter.

It might sound obvious, but keeping your doors closed at all times will help keep snakes away. By leaving doors open unattended, you provide direct entry for the reptiles to enter your home, and they won’t need to squeeze under the door to gain access.

In addition, some garage doors leave spaces where a snake could potentially slide through and inhabit your home. Any crack in a garage door or a gap introduces a potential entry point for snakes if you live in an area with a lot of snakes. If there is any gap in your garage, it is advisable to get help from a pest control professional to keep your space snake proof and prevent the risk of these creatures in your house. 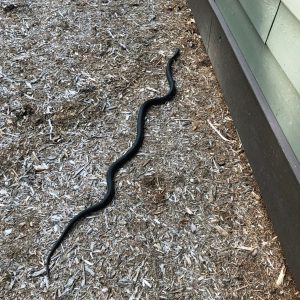 Can Snakes Flatten Their Bodies To Squeeze Through Doors?

Yes, snakes can make themselves flat to be able to squeeze through tight spaces. They can flatten their bodies for several reasons.

The most common reason for many snakes is to create a larger surface area to absorb more heat when out in the sun. Some other snake species flatten their bodies to appear more significant to their predators when they encounter risk. It could also be a hiding technique to make them less pronounced and difficult to see.

Squeezing under doors is not one of these reasons. The chances are meager that a snake would do this unless it had flattened its body before and happens to be by a door conveniently. It is almost impossible.

Snakes flatten themselves on rare occasions and are often stationary when they do so. If there is no danger, they will go back to their natural form once they are on the move again. There have been instances where people have reported seeing a snake “try” to enter a house or building from under a door. Trying means they probably saw a snake’s head under a door, but the snake slithered away soon after.

Some snake species can flatten themselves for around an inch, but not over their entire length. Thus, they can try to get into space but fail to fit through as it cannot flatten its full length to fit into the intended opening. 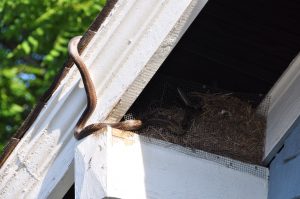 How Tight Of Space Can a Snake Fit?

It is news that no one probably wants to hear, but snakes can fit in tiny spaces, smaller than anyone could imagine. Not as small as a keyhole, but close. Gaps in bricks, ventilation, drainage pipes, wall and door cracks are examples of tight spaces through which snakes can squeeze through and enter a home.

Snakes vary in type and size, and small snake species such as grass snakes can squeeze through quite tiny spaces. However, it is unlikely that a grass snake would leave the grass and head over to a residence unless it is very bushy around or there is a lot of vegetation by the entry points.

Snakes can smell their rodents from far, and if your home is infested with mice or other rodents, it can attract snakes that will try to enter the house through any opening they can fit through.

Since it is nearly impossible to evaluate how well-proofed your home is as a homeowner, the best thing is to schedule pest control inspections at least once a year to have them service the home and ensure it is safe from infestation by any pest.

Also, if you are moving into an old house or have been in a place for a couple of years, having a plumber check drainage pipes is also helpful to avoid snakes crawling in through worn-out pipes like those connected to a laundry dryer, for instance.

If you’ve spotted a snake in your home or see them roaming around your property, you should contact Wildlife Troopers in South Florida as soon as possible. We will be able to determine whether or not the snake is venomous, and give expert advice on the best way to remove it and prevent it from entering your house in the future.